No doubt Kim is ageing like wine, and today we will discuss her secret diet plan by which she manages to be the curvy Kardashian even after having four babies.

Who is Kim Kardashian?

Kimberly Noel Kardashian is a known American media personality, businesswoman, and socialite worldwide. Paris Hilton became the reason behind her first breakthrough in the industry.

She received wider notice in 2007 when her sex tape was released with her ex-boyfriend Ray J. After that incident, she got into the limelight, but it positively impacted her. Kim and her family have been seen in the series Keeping Up with the Kardashians.

She has built a massive worth online as a social media star and has millions of followers on her social media profiles. She also launched her fashion boutique chain, Dash and KKW Fragrance.

Basic information about her

Kim’s father, Robert Kardashian, was a third-generation Armenian-American and her mother, Kris Jenner is of Dutch, English, Irish, and Scottish ancestry. Khloé and Rob are her younger sister and brother, and she also has an older sister, Kourtney.

For high schooling, Kim attended Marymount High School in Los Angeles, which is famous as a Roman Catholic all-girls school. Her parents divorced in 1991, and her mother married Bruce Jenner, who won the 1976 Summer Olympics decathlon. In 2003, Kim’s father died due to cancer.

She began her Career as a Stylist

It was around 2003 when Kim started his career as a personal stylist to the R&B singer and actress Brandy. Kim had a childhood friend, Paris Hilton, for whom she also worked as a stylist in 2006. It was just the beginning of her career when she began appearing in various reality series, making her debut.

A PR strategist was working with Hilton, Sheeraz Hasan, who had previously met Kim and he knew that she could do whatever it took to make her brand on top. From the very beginning of her career, it was evident in her head that she somehow wanted to create a successful brand on her name.

In one of his statements, a freelance photographer, Rick Mendoza, states that he has assignments to get photographs of Kim for the next three years. According to Kim, Hilton was the person who gave her the career, and she also mentioned that she acknowledged that.

Finally, she entered her dream business world in 2006 with her two sisters and opened a boutique in Calabasas, California, named DASH.

Kim’s sex tape was leaked in February 2007, and she filed a lawsuit against Vivid Entertainment, which distributed the film. After some time, there was news that she settled the suit for US$5 million, allowing Vivid Entertainment to release the tape officially.

Later on, several news outlets criticised Kim and her family for using sex tapes to promote her reality shows. Many other people were also against her after this incident. In October 2007, the Kardashian family was invited to appear in the reality television series, which was named “Keeping Up with the Kardashians”. The television series was an excellent success for E!.

Kim was the face of the campaign in Fusion Beauty, and Seven Bar Foundation launched “Kiss Away Poverty” in September 2009. It was October when she launched her first fragrance under her name, “Kim Kardashian”.

Wasn’t Happy with her Body, Looking like a Puffed Potato and Decided to Transform herself Completely

Kim has four children and she publicly discussed her difficulties during her pregnancy. When she was pregnant with her first baby, she experienced pre-eclampsia, and she was forced to deliver at 34 weeks.

Her first two pregnancies were complicated, and she developed a placenta after delivery. To remove that, she had to go through surgery; after all that, she was advised by the doctors that she should not get pregnant again because it would affect her health. Her third and fourth children are born through surrogacy.

She was unhappy with her body because she was looking like a puffed potato and decided to transform herself completely.

Kim is a mother and a celebrity, and it was not easy to manage both jobs and be in shape at the same time, but still, she is in perfect condition. According to the sources, she strictly followed the Atkins diet plan. She managed to lose 70 pounds by following the Atkins 40 diet plan.

Just need to get down to my weight a few years ago. Not gonna complain anymore. Starting diet TODAY! No carbs. crazy workouts. Whos with me?

She also mentioned in her interview that she used to follow this diet with her dad in high school. After having her second baby, she finally decided to feel sexy and sound again. Another thing that boosted her shape was a date set for shooting the cover of a famous magazine.

Kim has a goal in her mind that she naturally has to transform her body before the deadline. She loves to work out, but the main thing that she has to manage is her unbalanced eating habits. She loves to eat sweets which somehow affects her health.

Kim has to switch her unbalanced eating habits to a balanced, healthy, strict Atkins diet. The Atkins 40 diet plan is perfect for her to lose weight and feel satisfied.

What is the Atkins 40 Diet Plan?

Atkins 40 is a worldwide popular low-carb diet that is planned in such a way that controls the portion size, resulting in eating 40g net carbs per day. If you want a variety of choices of foods to be in your diet, then Atkin’s plan is perfect for you.

There are a variety of foods to choose from that can help you to lose weight and feel satisfied. In this diet, you are served 40 grams of net carbs, 4 to 6 ounces of protein and 2 to 4 ounces of fats per day. It is a simple-to-use and effective diet plan you can go for.

According to the rumours, Kim was also taking Garcinia cambogia weight loss pills, which recently got famous as weight loss booster pills. It is a tropical fruit with a tangy taste, helping you to lose weight faster.

One more trick she used to lose weight quicker and more effectively was drinking green coffee, like Oprah Winfrey. Kim has used brands for green coffees, such as Refresh Garcinia and Green Coffee Cleanse.

Kim has lost weight like magic and has undoubtedly done a commendable job. She has motivated millions of people through her transformation. If you also want to use these pills, consult your doctor and always go for FDA-approved products.

With some of her transformation photos, let me show you her weight loss journey.

2. Gained around 70 Pounds When She was Pregnant with her First Child 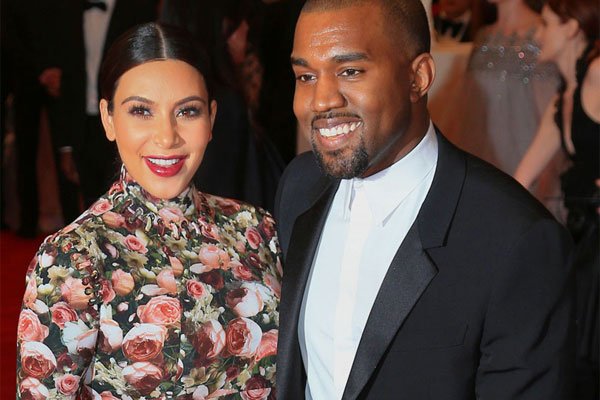 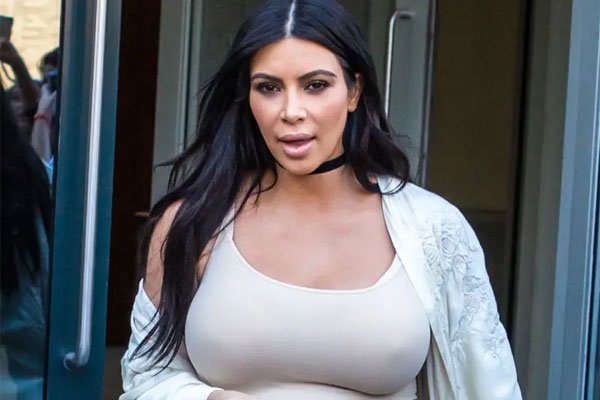 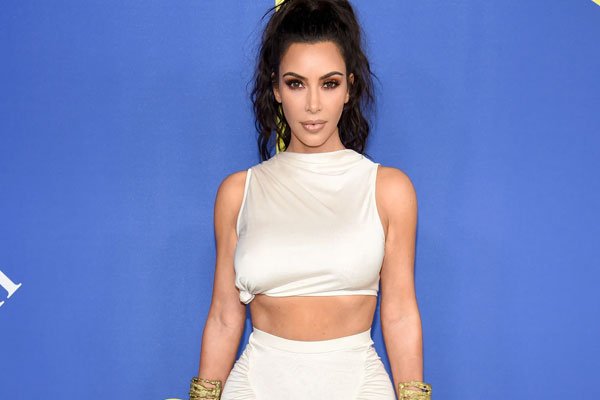 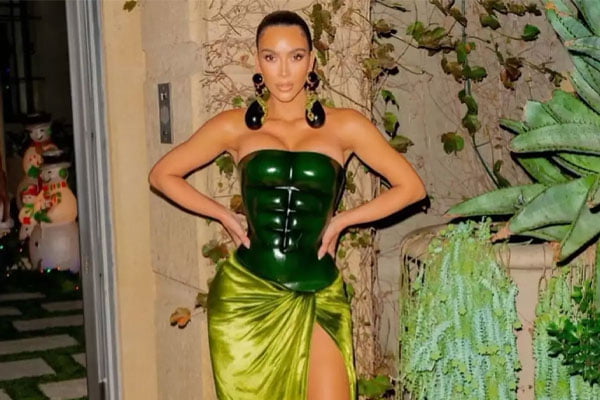 When Kim was only 19 years old, she married a famous music producer Damon Thomas, but after some time, Thomas was the one who filed for divorce in 2003. Later in an interview, Kim blamed Thomas for the separation because he used to physically and emotionally abuse her. Before Kim and Thomas’s split was finalised, she started dating Ray J, a well-known singer.

In October 2010, Kim started dating NBA player Kris Humphries and later got engaged to him. On August 20, they both got married in Montecito, California. She filed for divorce only 72 days into the marriage because of irreconcilable differences.

In April 2012, Kim started dating her long-time friend and worldwide famous rapper Kanye West. Later, she married him at Forte di Belvedere in Florida, Italy. Several news channels claim that the marriage was just for media coverage, and her divorce was also for media attention.

During an interview with CNN, Kim and Kanya discussed their divorce. They said the reason for their divorce was “irreconcilable differences”. Finally, they both agreed to the divorce in April 2021 and decided to have joint custody of their four children.

After her divorce from Kanye West, she started dating world-famous actor and comedian Pete Davidson in November 2021. And again, the same thing happened; they ended their relationship due to incapability.

Kim’s Net Worth and her Business ventures

According to Forbes, Kim has generated a massive net worth of $1.8 billion throughout her career. 2017 was the year when Kim launched both her beauty and fragrance lines which were named KKW Beauty and KKW Fragrance. It was her peak time. On 8 June 2018, she made a cameo appearance in the heist film Ocean’s 8.

In June 2019, she was criticised for her announcement because of the name of her new shapewear, Kimono, which argued disrespected Japanese culture. After that, the hashtag #KimOhNo started trending on Twitter, and the mayor of Kyoto also wrote that she should reconsider the trademark of the Kimono. All were against the name Kimono as her shapewear brand name.

February 2020 was when she partnered with Nordstrom and made her product available to offline shops. Until then, the company was expanded to various products like lingerie, bodysuits, loungewear, dresses and winter wear. Her brand became so famous that it was also seen at the 2020 Summer Olympics and Paralympics. And even the athletes of the 2022 Winter Olympics were also wearing Skims’ clothing.

According to the sources, her company valuation in January 2022 was around US $3.2 billion.

Being a mother of four, Kim did a fantastic job in losing a lot of weight and maintaining her curvy figure throughout her career. Her transformation pictures can be an inspiration for others who are looking to lose some pounds.

You can also follow Kim Kardashian’s weight loss diet plan to get faster results. Hopefully, all your queries related to the secret behind her weight loss are answered in this article.

If you want to read more such articles showing an unbelievable transformation, don’t forget to check out our previous article about Jesseca Dupart. And stay tuned to our website for more interesting content!