Home Technology Which Chromebook should You Buy in 2019
Technology

Which Chromebook should You Buy in 2019

Chromebooks are the new tablets. The ease with which individuals can carry them and the economical price that they come at, make them a hot favorite among people these days. Although some people argue that smartphones are here to fill that gap. But the screen size of smartphones is very small for many occasions. Services like Spectrum packages have made it easy for everyone to access the Internet. It is good to see those devices through which you can access the Internet now come at affordable prices too.

The list of some of the most considerable Chromebooks include:

The Chromebook that tops the list is the Google Pixelbook. People did not appreciate it that much when the company introduced the first version. But it was only sometime later that Google revived it in a way that no one would have imagined. The Chromebook stands completely independent of its predecessor. This is because unlike the old version, this new model can run the Android apps on it natively. Apart from that, it has a huge storage space to offer. Not to forget the amazing stylus that comes with it. The Google Assistant comes as an added bonus. Some of the features that make it a must-have included:

However, there are a few downsides to it. You will have to purchase the pen separately. It does not come with the Chromebook. And if you are planning to use it for watching videos or listening to songs, you will have to face some disappointment. Because the audio performance is a bit poor.

Asus offers you the specs of a premium Chromebook at an affordable price. Thus, making it to the list of ‘considerable options’ when it comes to Chromebooks. In fact, it was the first choice among many before Google introduced the Pixelbook. It still remains a very popular choice among individuals who want almost the same features as the Pixelbook offers. But does not come at a huge price tag either. You will be impressed by the elegant tablet mode that this Chromebook offers. Apart from that, you will also like the tactile keyboard that it has to offer. However, you will have to deal with middling speakers. And the fact that you won’t get an out of box Android app support if you purchase this Chromebook. 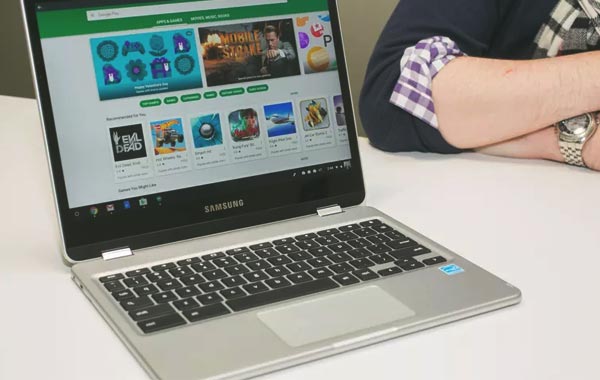 Talking of Chromebooks, how can we not discuss the Samsung version. When the android apps started heading to Chromebooks, Samsung introduced its version of this beautiful Chromebook. It comes with a touchscreen, making it all the fancier. It also has a built-in stylus. So you do not have to purchase it separately. Many believe that Samsung’s Chromebook Pro is not only better than its competitors but also many of the Android devices. Some of the things that will encourage you to purchase Chromebook pro include the simple design and the vivid screen stylus. However, like every device, this too has some downsides. Purchasing the Chromebook pro would mean that you will have to deal with weak speakers. Apart from that, the maximum battery life that this Chromebook will offer is 9 hours. But that is not that big an issue.

Although it comes at a hefty price, it is worth the investment. Acer, with its Chromebook Spin, changed the way people view Chromebooks. It has an aluminum body that makes it look, ah, so beautiful. Apart from that, it has a beautiful display. You are sure to get some envious stares if you take this beauty to work. However, the premium finish is not the only plus point that this Chromebook has to offer. There is much more to the whole deal. It comes with an integrated stylus. Apart from that, it has the hardware that you will find in a mid-range laptop. Powered by quad-core Intel, the IPS screen has a QHD resolution spread. Not only this, but the brightens and the sharpness that the screen resolution offers are pretty good too. The keyboard has no flex and will make traveling easier for you. The touch-pad is just as impressive as the keyboard. Overall, making the features of this Chromebook attractive enough to purchase it while ignoring the price.

Also Read  What Is C# Used For?: A Beginner's Guide

Hope this list helps you to choose the best Chromebook for your use. If you think that you are about to make an unusual investment that will be heavy on your pocket, cut down on expenses elsewhere. Like your cable service or Internet service provider, for example. Opt for a company that has reasonably priced packages and good service too. Like Spectrum. The company also offers one of its kind customer services. You will never be disappointed when you call a Charter Spectrum customer service number.

How to Choose the Right Food for your Pet

Services to Expect From a Lifeline Company

The best streaming services for your children in...

The Govt Announces to Liberalize the Mapping Policies...

Tips for Security in the Modern Era

Things to Know About Technology Consulting

These Are the Greatest AirPods Tips and Tricks

What Is C# Used For?: A Beginner’s Guide